Hero Interrupt (defense): When a boost card is turned face up while the villain attacks, cancel all boost icons ([boost]) on that card. Then deal 1 damage to the villain for each boost icon cancelled this way. 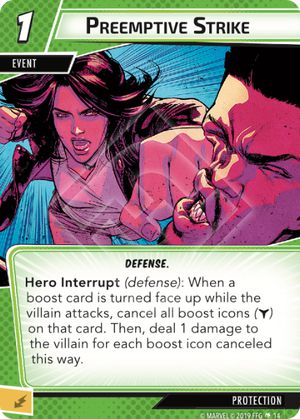 DaLurka · 2
Well since the card says "when a boost card is turned face up", I don't believe you have much of a choice. I think you've been playing it right. Way I see it, the new rules do not change this. However, I believe that in multi-player, if you play it when another player is attacked, you become defender (RRG 1.4 clarified this). — neothechosen · 7013 9/8/21
Can Preemptive Strike be played if I am defending with an ally? — Carquinyoli · 186 11/11/21
The card does not say "while the villain attacks YOU" so it should be playable when an ally or even another player defends. However, per the rules if you play a defense card when someone else is being attacked, you become the target of the attack, so it would switch any damage from your ally to you. — Time4Tiddy · 10 12/5/21
The key thing to remember is that only one player can use cards (allies, defense events, or exhausting your identity) to defend each attack. If you block with your own ally, you can preemptive strike. If somebody else blocks with their ally, you can't - it's a defense event and another player already defended the attack (in this case with an ally). There's a great example here https://www.fantasyflightgames.com/en/news/2021/5/18/rules-reference-debrief/ — Blackhaven · 2 12/26/21
You cannot use preemptive strike if you defend with an Ally, even if it's yours. Only one character can be defending an attack and events are considered an extension of your identity. — Killbray · 2 11/20/22