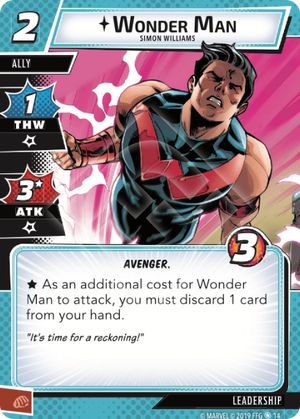 Wonder Man is an interesting ally. His strength is that, while if you have him attack twice he has the same total cost as a cost 4 ally, he is much more flexible than a cost 4 ally. You don't have to have all the resources all at once, you can even choose to put him out without using him at all and wait for a later turn to pay for his attacks. Or if you don't need the attacks you can just put him out and thwart one or twice before blocking with him. While this may seem disappointing, it actually isn't a bad option since a standard cost 2 ally is mainly for blocking anyway. The point is that you only have to pay for his attacks if and when you need his attacks. The downsides are that you are forced to discard cards rather than pay resources for his attacks, that it isn't very efficient to heal him unlike a real cost 4 ally, and that in general a lot of the cost 4 allies are better than Wonder Man. I think he is a good middle of the road ally who fits in some decks and not in others, and is interesting to play with.